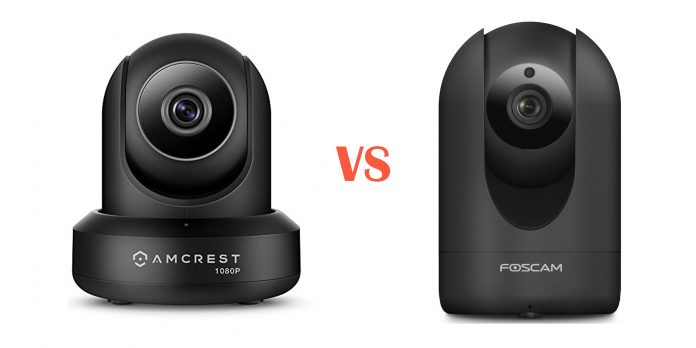 If you are on the market you will likely have heard of Amcrest and Foscam both of which are major companies in the camera surveillance niche. Both companies have a selection of different cameras with that in mind. I have used a selection of both brand of cameras. Though here in my direct comparison I will compare one of each company’s cameras to each other to get a more direct comparison between them.

The cameras I choose for each where one that would be best suited for everyone with both offering 1080p video which is enough for most situations. For Amcrest I will be covering the Amcrest ProHD 1080p Model and for Foscam I will be covering the Foscam Home Security Camera, 1080p model. I will give an overview of each of the products covering what I think of each then offer and after I will do a direct comparison between the 2 options.

To start off I want to mention this camera is very easy and simple to set up especially when I compare with a host of other security cameras I have tested which often have issues though with this camera it’s very simple and intuitive.

Secondly as for the image quality – this camera is amazing. Not only does it look crisp and sharp during the day but even at nighttime using the built-in night vision everything looked surprisingly sharp. The second great thing with the image is the viewing angle which is 90 degrees. What this basically equates to is an image which shows a greater area which allow for bigger areas to be recorded all on one camera. Also, with the camera you can zoom in if needed though as the zoom is a digital zoom you will loose video quality the more you zoom in, though if you are only zooming in slightly the quality drop off is minimal and you likely won’t even notice it.

Another great thing with these is that they can connect straight to your Wi-Fi which allows you to view the camera feed anywhere in the world where you can get an internet connection. The app you install on your phone works alongside it. There is also a 2-way audio system that works seamlessly.

This camera also offers the setting for getting an alert when the camera detects motion which is a handy option to make use of. Also making use of the Amcrest cloud storage allows for free storage of 4 hours of footage which is an nice addition.

This Foscam is their model for FullHD resolution or 1080p and is the most comparable model to the Amcrest model.

Firstly, as far the set up goes for this security camera – it is set and easy to do and I didn’t have any problems getting started and I was up and running in literally 10 minutes after unboxing it. For reference the first time you use it you will have to connect it directly to the Wi-Fi using a wire but after the initial set up you can use the Wi-Fi and there is no need for a direct wired connection. This means if you didn’t guess already that the Foscam has a ethernet port and there you can connect it directly to your router using an ethernet wire if you prefer.

The camera offers a viewing angle of 110 degrees which is even better than the Amcrest – this means the camera covers more the area and is particularly useful if you want to cover a larger area with 1 camera. The image quality is great at 1080p Full HD and is recorded at 25 FPS(frames per second). This camera also has night vision which uses infrared. The image quality remains clear and sharp even when using this feature.

Amcrest vs Foscam – Differences and Similarities

Video quality – Both cameras come in at 1080p Full HD quality and both has a crisp and clear image. Both have night vision using infrared technology – the night vision has a range effectiveness of 32 feet on the Amcrest whereas with the Foscam is it 26 feet.

Features – Both cameras have a host of useful features – both have apps which can be used to view the video remotely, both offer a motion detection alert, both have Wi-Fi connectivity, both have zoom functionality, both have a mic and speaker 2-way system, and both have different storage options(cloud and local).

Storage – There are 4 hours of free cloud storage included on the Amcrest and you can also store video with a built in MicroSD card. As for the Foscam you can use their cloud storage and a free 1-month trial is included though after you will have to pay a monthly fee. Also, you can store locally on the Foscam using an SD card which is free to do so.

Viewing angle – the Foscam has a better viewing angle of 110 degrees and allows you to see and record a bigger space though the 90 degrees offered but the Amcrest should still be sufficient for most situations.

Wi-Fi – The wifi for both work really well and remain consistent. As for the range the Foscam seems to work better even when further away from your router though the Amcrest still has a solid range.

Both cameras offer all the features that you would want from a security camera but which is better overall?

Well for me the Foscam is the slightly better option thanks to offering a bigger viewing angle and the camera itself being more slightly more durable.

Though realistically both of the cameras do exactly what you want and need from a security camera and it is hard to fault either. If you are struggling to choose between them going for the one that is cheaper would be my recommendation for most people though if you really need a wider viewing angle you can opt for the Foscam. Overall both cameras are great value and I can easily recommend either of them.