It’s always a good idea to have your house completely backed up, in case of emergencies. Whether you live out in the peaceful suburbs, or smack bang in the middle of the city, with a neighbor who continuously overdraws power, it’s just wiser- and ultimately cheaper- to have your own power back up, these days. And if you’ve had to sleep through these stifling summer nights without any cooling, or tried to endure a nearby house with a generator that’s loud enough to put a lawnmower to shame, you know that something like that is best remedied quickly- and as silently as possible. Your best bet? The quietest generator possible.

But the search for an ear and wallet friendly generator is not an easy one. In fact, finding an economical and quiet generator that won’t burn a hole in your pocket, takes quite a lot of research. And it’s not just your own comfort you have to consider. Sometimes you simply can’t have a generator that can wake the dead. If you’ve ever gone camping and had a partner whose generator can clear the site, you know exactly what I mean. In some cases, you do find a relatively quiet generator, but it’s practically a behemoth and you can’t lug it around everywhere, if you’re going on the road. So, the main thing to focus on is a doubly quiet portable generator. Keeping in mind all these two key issues, here’s some generators you definitely should consider getting, for all of the comfort, and none of the noise.

The Quietest Generator- My Top Five

With a Westinghouse 212cc OHV engine and four gallon fuel capacity, this easily portable generator is definitely one for the marathons, claiming a full sixteen hour run time (at a 50% load). The output aside, the Westinghouse WGen 3600 is not only one of the quietest generator around, but also incredibly easy to use for both the house and on the road, whether you’re camping or traveling. In fact this particular generator has design specifications particularly for camping, with a steel frame and roll bars added on for easy carrying and quick and safe stashing. Camper van? No problem. RV? Still no problem- it fits in easily, and connects without a hitch, thanks to its TT-30R 125V outlet. And favorable reviews mention over and over about how unbelievably quiet it is, even in the dead of the night.

Another heavily emphasized plus is the built in Automatic Low Oil Shutdown. Once the oil hits low viscosity or low gas, it simply shuts off. You don’t have to worry about it running all the way till it’s basically on fumes, or damaging the engine and shortening the life. The Electrical Overload Protection is also a feature that appeals to many homeowners looking for back up supply. The hour meter helps you keep a close eye on the output, and pretty much the entire house can run on it for a few hours. Seeing how summer is here and power cuts are right around the corner, this is one of the biggest appeals of the WGen 3600. 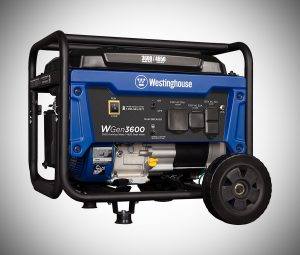 The Briggs & Stratton 30651 P2200 PowerSmart Series Portable 2200-Watt Inverter Generator with Parallel Capability, is definitely a mouthful for a name- and just as chock full of features. A bit of a departure from traditional generators, this offering in the PowerSmart series boasts a 111 cc OHV engine with a sleek and handy design that makes it exceptionally portable. And if being one of the most quiet generators on the market is not its only niche. This particular model comes with a DC outlet for directly charging electronics with a USB plug in charger. Extra attention has also clearly been paid to its output, with Briggs & Stratton claiming that it has less than 3% total harmonic distortion, which is a blessing in no disguise for every person whose gaming spree weekend has been endangered by power cuts and a shaky back up for his laptop and console. Not to mention the sound, which clocks in at less than 56 decibels, or the volume of a regular conversation.

You should note though, that the 30651 P2200 model has an eight hour run time at 25% output. However, with a one gallon tank, it’s a lot easier to carry around, not to mention a lot easier to refill as well. 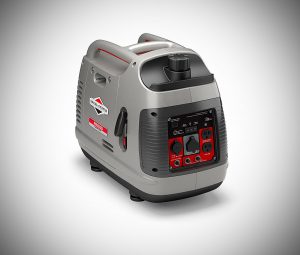 With specifications stating 2000 surge watts and 1600 rated watts and a 79.7 cc 4-stroke OHV engine, the WEN 56200i can hardly be forgotten in a list of reliable power back ups that don’t deafen you while they work.

This lightweight generator might not boast to be a behemoth like the first two on the list with a lower end six hours at 50% load, but with a one gallon engine, it promises less than 0.3% total harmonic distortion, which should definitely make your ears perk up if you have an array of delicate electronic items, or a steady gaming session planned ahead. The other feature this exceptionally quiet generator offers is sound equal or less than an air conditioner. Did you just focus on the sound your air conditioner makes? That’s right. A low hum on its worst day, and nothing louder than that.

Again, the WEN 56200i probably isn’t going to handle all your requirements if you’re planning, say, an extended camping trip, but that issue can also be remedied easily enough with its easy parallel connecting capability. 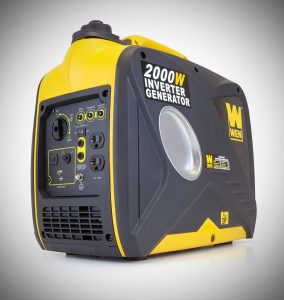 With a 3100 Watt output, RV Ready capability, and Wireless Remote Start, the Champion Power 75537i might be pricier than its peers on this list, but the amount of functionality packed into it easily explains why. It has a starting output of 3100 watts and 2800 watts running. It is easy push start with a Touch button and an economy mode that can extend the eight hour run time significantly.

Also, you’d probably think that with a relatively big output, this quiet portable generator could easily handle an AC… And you’d be right. An 15,000 BTU RV air conditioner is no problem for this light and sturdy little guy, so you can pack it right up for your camping trip. Also, with a Wireless Remote capability that lets you switch it on from 80 feet away, you’ll be shaving off some unnecessary walking back and forth. Along with the standard USB access and DC outlet, this portable Inverter Generator comes with its own wheeled kit, too.

And the sound? Soft enough to blend in when you’re on that camping trip. Ready to pack your bags already? Just hold on for the next one. 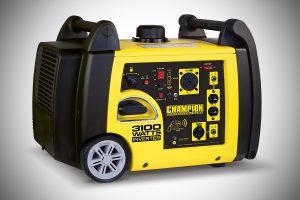 Now, you might be wondering what makes this generator special enough to be number one- and it isn’t just the fact that it’s Honda. The unusually high ratings the Honda EU2000I has, despite being the priciest on this list, are well earned. Customers happily relate of using these for years straight, with no issues or decline in performance and I myself can see why after using it for a few months myself.

The Honda EU2000I is an unassuming and quiet generator that packs a wallop- a 1600W wallop, to be precise. The Honda promises clean and steady energy supply for sensitive electronics, and still enough power to handle an AC, and easy and continuous power supply even on the go. A feature unique to this generator is something Honda calls their Eco-Throttle System, which lets it run up to 9.6 hours (higher end). This makes it ideal for situations where there’s been a power breakdown. And even if those don’t happen around you, extended power cuts or overnight trips can be met with a ready and handy portable supply. And this model also comes up with a parallel linking capability, which lets you draw a massive 4000W from two linked generators. All the while murmuring away at volume lower than your AC’s. That muted sound production plus the steady performance puts it right at the top, as our best quiet portable generator recommendation. 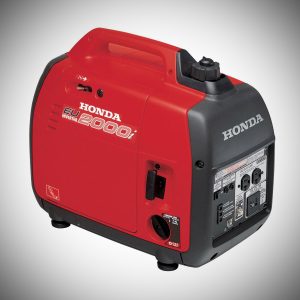