Don’t you wish that *snap* just like that, all your problems could simply go up in flames? It would be convenient, not to mention rather terrific. But while there’s still some time to go for a problem whacking invention to come around the corner, luckily there’s already a solution to a basic problem that you can *snap* solve from the ground up- weeds. Yes, you could go the old-fashioned way and snip them out one by one, but let’s face it- Summer would be over by the time you cleared your yard out. Pesticides are an option, but the thought of the chemicals and the poison lingering where your herb garden will come up, your kids or your pets might play, is not the least bit comforting. So, don’t go buying a goat just yet. There’s one more thing you can do to clean up a weed ridden yard in the shortest time possible- weed torches. Here’s a list to help you select the best weed torch for you.

The basic premise of a weed torch is simple. It’s an easy to carry, hand held device that produces a directable flame. The idea of using fire to clear out unwanted plants has been around since centuries. It’s handy too, pardon the pun. You don’t have to worry about chemical residue, or pests that linger in the corners, and come back and attack your delicate plants with a vengeance. A propane weed torch is the most common type of weed burning torch you’ll find on the market these days. You don’t have to set the entire yard alight, which most people envision- exactly the opposite. The finely direction flame of a propane weed torch helps you destroy the main stem. Once the stem is gone, the rest of the plant above dies automatically, and can just be cleared out. The torches we’ve listed below are effective enough to clear a moderate to large growth in one go, and maybe one more round 1-2 days later to get all the roots too. That’s not because of the power of the weed burning torch, mind you, but just how weeds grow.

One quick piece of advice before I recommend my top three is to get a quality pair of boots and a thick pair of leather gloves. This will stop you from burning your hands when working and will also protect your feet.

Does the name sound intimidating? That’s because it is- and we’re not even weeds. The Red Dragon VT 2-23 C is a 100,000 BTU Propane weed torch that boasts the National Home Gardening Club Member Tested Seal-of-Approval. It comes with a torch kit and can easily be connected to any refillable propane tank and the fitting can be tightened by hand. This ready assembled torch shows up on the best weed torch list for homeowners for a reason. It’s not just for weed blasting, too. It can also be used for thawing frozen pipes and small scale sterilization, and is especially suitable for people who have to cover some acreage but don’t require a full on farm torch.

The Red Dragon VT 2-23 C weighs in at an easy 3.7 lb, which isn’t too big for almost anyone. The nozzle end is approximately two inches, which lets you target the weeds or the area you want to clear with almost surgical precision. The flame is strong enough to clear young and hardy little weeds in the first round itself. It is still better to go for round two in a day’s time, to get any roots left behind that might be more visible now. The flame isn’t a roaring fiery tongue, either. It’s an understated stream which works more noticeably than it shows. And burning at an incredibly high temperature, it’s always a good idea to dampen the area a little before using this super effective weed burning torch, so that you can remove weeds from exactly the area you want, without giving the fire any chance of spreading right or left from there. 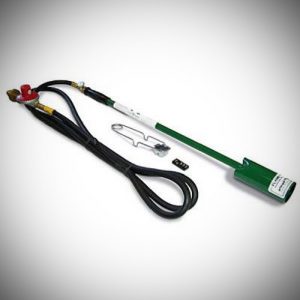 Another Red Dragon in contention for being the best weed torch? Boy, these things must be really effective… Exactly.  The Red Dragon VT 2 1/2-30 C features a 400,000 BTU torch and an adjustable needle valve. It is similarly connectable to an external propane tank, and can be hand fitted. The VT 2 1/2-30 C checks in slightly pricier than the VT 2-23 C, but has a stronger flame that is extremely effective. Again, only 3.5 lb in hand, this weed burning torch is not likely to leave any unwanted green standing in your yard for long.

The VT 2 1/2-30 C works best with a 20 lb tank. It has a 28 inch handle and a comfortably long 10 inch hose. This model also has the advantage of being adaptable for use for a house or a small farm, because the output can hold up to 200,000 BTU per hour. The manufacturers promise a toasty 2000 degree Fahrenheit flame, so if you want to melt your driveway in winter, this summer weed whacker can be niftily pulled out again. 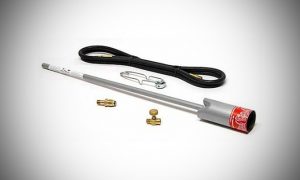 And yes! One more Red Dragon- and the sheer number of great features and quality explains the monopoly. The Red Dragon BP 2512 SVC is right on top of the list and the best weed torch, leaving models from its own parent company far behind. This particular set comes with a ten-pound propane tank, vapor torch kit, and a squeeze valve. Significantly bigger than the other models mentioned, the BP 2512 SVC has a squeeze valve that makes for considerable fuel savings and better spot targeting precision. It is admittedly also the priciest on the list, but it won’t burn a hole in your pocket, and the propane savings soon add up to happily significant amounts. At 400,000 BTUs per hour and a 27 lb kit in entirety, this set is quite bigger than the smaller VT models, but just as, if not more, fuel efficient. This size makes it a good option even for larger areas like schools and municipality spanning areas, with a backpack carry option to make it more portable. But there’s no denying how powerful this model is, not to mention that it’s so easy to use that it is converting erstwhile technophobes into happy campers- or happy gardeners, anyway.

Whichever propane weed torch model you choose to go with, one of these Red Dragon models will easily follow you, defeating weeds along the way. That’s a *snap* solution anyone can be satisfied with.