If you are on the market for a sewing machine you will have no doubt heard of the company called Brother. They produce some of the best sewing machines out there. In fact, there are a couple of their different models that I would like to compare.

The SE400 and the SE425 both of which are some of their more popular models. Below I will talk about the difference between the models and which is the best option between the 2. 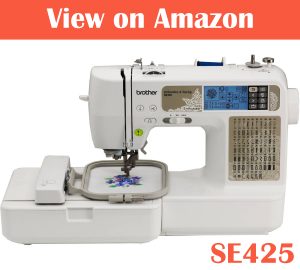 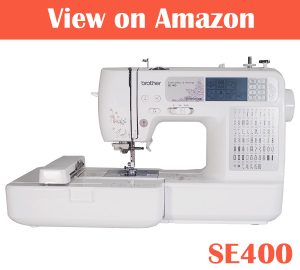 Both of these sewing machines are absolutely fantastic when it comes to sewing. If you have ever used a cheaper sewing machine before, you will immediately be able to tell the difference, it’s like night and day simply because the quality of these machines is top notch.

Both of the machines have 67 sewing designs which are built into the machines and to be frank they are nothing special but luckily you use a USB pen and copy over any design plenty of which you can get for free online- for example – this page. Both of the machines stitch 710 stiches per minute while doing regular sewing.

Both machines have been fitted with basically all of the same features and elements. Both have a spacious embroidery area for your own creations. Both have an LCD display with the built-in designs, editing features and tutorials for usage. For both the needle area is well light so if you are using it in a darker room you still will easily be able to work.

The needle threader is a breeze to get threaded thanks to the automatic threader built into both machines. Also, both machines offer a bobbin winding system which easily sets up bobbins quickly. Overall both options are basically identical in terms of their options they provide both of which I am very impressed with.

Both of the machines are extremely well made, and the design has been clearly well thought through and makes for everyday use a true joy!

Usually the Brother SE400 is more readily available and usually is cheaper than the Brother SE425 and this is one of the more notable difference between the 2 options.

Both of these sewing machines are almost identical with each other. Both have all the same features and elements of each other. The only notable difference I think worth mentioning is that the Brother SE425 comes with an additional CD with additional designs. Truth be told though about these designs is that they can easily be obtained on the internet for free and you can import them using the built in USB port for either of the different models, so this difference isn’t all that important.

If you are on the market for a garage door opener you will have likely heard of both Liftmaster and Chamberlain. Both are known for…

When you have shag carpeting in your home it can be much more difficult and tricky to get clean when compared with traditional carpeting. After…

A surge protector is sometimes something that is overlooked and can end up costing you if an electrical surge where to happen. It can and…