If you are on the market for a sprinkler controller that can be operated using wifi you have no doubt heard of both Rachio and Rainmachine. Both companies have their own variations and both of which are well rated and renowned with their customers.

But the question I want to know is which is the best option and which is best suited for you. Below I will cover each of them individually. Then after I will do a direct comparison and conclusion to the differences between the 2 models. 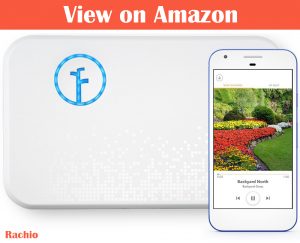 Rachio is easily one of the most popular and one of the highest rated options on the market. First of set up with this device was simple and easy to get up and running – it has been designed to be compatible with almost all irrigation systems which makes set up really easy. Using the app makes the set up even more speedy – when you are setting it up, it will register the sprinkler type, along with the ground type and not to mention the general local weather – so basically everything is well laid out and makes the overall set up a breeze. For me personally it only took me about 20 minutes to get everything installed and running.

Once you get things set up all the areas can be zoned which you can get set up using the phone app. You can set different patterns or schedules for each zone if you need to. Also, Rachio will make use of local weather to sometimes stop it from running. For example, if you have a rainy day you can have it set so Rachio won’t run because of the weather. Also, things like having frosty weather will also stop it from running. Any time when the sprinkler is scheduled to run but it gets turned off because of the weather you will get a notification of your phone. This way you can monitor it yourself and can change it if you would prefer.

The great thing with that is it can be set and forget for the most part and it will save you a lot unneeded water use which will undoubtedly save you consistent money with your water bill. Finally it’s worth mentioning the Rachio can be controlled by using things like google assistant and amazon alexa, it works just as you would imagine and the general operation is seamless. 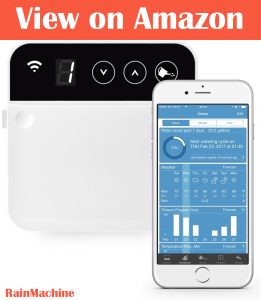 Just like the Rachio the installation with this Rainmachine was very easy to install. The instructions are well laid out and I found them easy to follow along and only took me about 15 minutes to get set up. If you do have any issues, there is live phone support which is nice to have if you need it though personally I didn’t use it.

Everything with this controller can be set up using a different program and schedule for each of the different zones. The 2nd great thing is that they all can be altered using the built-in weather statistics. For example, if it is expected to rain a certain amount one day and that is more the enough for the zones then the sprinkler simply won’t run for the day. The same would apply if it rains only a little one day. Then the sprinkler would adjust to just run a partial amount and take the rain into consideration. All of this will adjust according to your setting and schedule for each zone all of which can be adjusted individually as I mentioned before. As well as being able to operate it from your phone or tablet you can also operate it on your laptop/pc.

Overall this is a great device that does exactly want you want while saving you up to 80% on water which will indirectly pay for itself in 1-2 years in most cases. The only downside I can note is that the app itself crashed 2 times over usage over 2 months while that isn’t a big problem I did want to mention it.

When comparing the 2 devices directly with one another the difference between them in terms of quality is minimal at best. Both devices offer an intuitive set up and general operation using the apps work well. Both devices will also undoubtedly save you money with water costs and will water your garden etc. just as you want everyday while using the important weather data for that day.

Overall, I can easily recommend both devices though if I had to choose which is the better option I would say the Rachio is slightly better mainly because the app seems a little more streamlined and I never had any issues with it unlike the Rainmachine which was still good but still crash 2 times over the course of 2 months of usage.